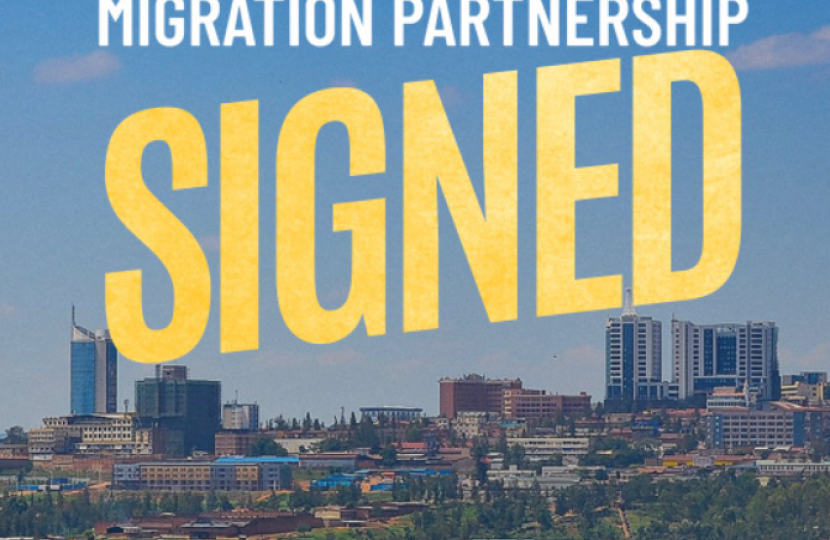 The Government's recent announcement about the processing of asylum claims in Rwanda is a significant one and one that has attracted much media attention and comment. I have read so much of the coverage of this attentively - and recognise the strong opposition that exists in some quarters to the policy, as well as strong support elsewhere - but wanted to set out why I support the approach and cannot idly endorse the unacceptable and unsustainable status quo.

Let me be clear in reaffirming at the outset that the UK has a proud history of supporting those in need of protection; indeed, our resettlement programmes have provided safe and legal routes to better futures for hundreds of thousands of people from across the globe. Since 2015, over 235,000 men, women and children seeking refuge have been offered a place in this country, which is more than any other similar resettlement scheme in Europe. This includes almost 100,000 British Nationals Overseas (BNOs) threatened by draconian security laws in Hong Kong, 20,000 people through the Syrian scheme, 13,000 Afghans, and around 100,000 Ukrainians.

However, it is clear that the global asylum system is broken. Some 80 million people are on the move around the world, driven from their homes by conflict and instability. Many more people are on the move to seek better prospects, driven by a desire for a better life. The result is increased illegal migration flows, including into Europe and onto the UK, with our asylum system collapsing under the strain of real humanitarian crises and people smugglers exploiting the system for their own gain.  We saw the dangers of these crossings so starkly in the Channel last November where 27 people drowned, and when 39 people lost their lives in the back of a lorry at Grays in Essex in 2019. Both were appalling tragedies and they must not be repeated.  That is why standing back and doing nothing is not an option - to do so would see the numbers of people making these dangerous journeys dramatically increase further, with spiralling costs and all the risk to life they involve, all facilitated by evil criminal gangs who have no regard for those they are transporting, apart from turning a dirty profit.  There is a moral imperative to act and I would gently add that I have not yet seen a single credible alternative plan that meets the scale of the challenge and all its complexities - and I say that as someone who deals with this issue every day of the week as the Minister for Justice & Tackling Illegal Migration.

I believe it is therefore extremely welcome that the UK has now entered the world’s first Migration and Economic Development Partnership with Rwanda. Under the partnership, people who enter the UK illegally, including by small boat across the Channel, may have their asylum claim considered in Rwanda, rather than in the UK, with a view to receiving the protection they need in Rwanda if their claim is granted.  I suspect that this will be the first partnership of its kind - and we already know that other European countries have similar negotiations ongoing at present.  It is clear we need global solutions to tackle this global challenge.

The UK is therefore investing £120 million into the economic development and growth of Rwanda, with funding also provided to support the delivery of asylum operations, accommodation and integration, similar to the costs incurred in the UK for this work presently. Furthermore, it is the case that Rwanda has one of the fastest-growing economies and enterprise cultures, with growing trade links with the UK, which this scheme will complement as part of the Government’s 'Global Britain' agenda.

Despite some of the misreporting and scaremongering we have seen, Rwanda is a fundamentally safe and secure country with respect for the rule of law.  Under this agreement, Rwanda will process claims in accordance with the UN Refugee Convention - of which it is a long-term signatory - national and international human rights laws, and will ensure protection from inhuman and degrading treatment, or being returned to the place individuals originally fled from.  I should also just add here for reassurance that when deciding who will be relocated to Rwanda, a thorough screening process will first be undertaken, where any vulnerabilities will be fully considered, along with all other relevant factors.  Cases will be assessed on a case-by-case basis, with the ultimate determinative principle being 'is Rwanda safe for that individual?'.

Rwanda has a credible track record of hosting refugees and providing safety, working constructively with the UN Refugee Agency to provide food, healthcare and jobs, with over 130,000 refugees recently resettled. Specifically, both the EU and the UN resettle people in Rwanda. Since 2019, Rwanda has been working with the UN Refugee Agency and the African Union to support over 500 refugees and asylum seekers evacuated from Libya under the Emergency Transit Mechanism. They are housed at a dedicated centre providing mental health services, legal assistance, employment, training and opportunities. Rwanda has also supported around 30,000 Burundian refugees who have transited to the centre since 2015.  I also happen to think it is admirable that the Rwandan Government feel a moral obligation to play their part in ending the despicable criminal enterprise of people smuggling and worry greatly about lives being lost in the course of the perilous journeys we have seen being made across Europe and beyond - and are determined to help stop such journeys in future.

This new approach, combined with the wider reforms to the asylum system and the changes to our laws through the Nationality and Borders Act, will help to deter illegal entry into the UK. In doing so, it will help break the business model of the criminal smuggling gangs, protect the lives of those they endanger, ensure continued support for the truly vulnerable, and enhance our ability to remove those with no right to be in the UK.

After all, nobody should be paying a people smuggler, getting in a small boat or in the back of a lorry, with all the risk that entails to life, and attempting to get to Britain - all those making such journeys are leaving what are safe European countries with fully functioning asylum systems.  Ultimately, with 80 million displaced people in the world, we cannot accommodate everyone here in the UK, but people who wish to come here should come through safe and legal means - opportunities we are committed to continuing to provide in generous measure, in line with this country's proud tradition, but our generosity is undoubtedly constrained and challenged by present illegal migration flows.  These issues cannot be seen in isolation and I strongly support the steps we are taking to restore a pragmatic and fair balance in our asylum system, preserve life, end the evil criminal enterprise of people smuggling, and provide sanctuary for those who are most vulnerable, as we always have.

Finally, for more information, I would draw local people's attention to the recently published country policy and information notes relating to the partnership, here: https://www.gov.uk/government/publications/rwanda-country-policy-and-information-notes. The relevant comprehensive factsheet can also be found, here: https://homeofficemedia.blog.gov.uk/2022/04/14/factsheet-migration-and-economic-development-partnership/.

My latest fortnightly Westminster Report newsletter has just landed in inboxes, filled with lots of interesting news and updates from across Corby & East Northamptonshire and my work in Westminster.