European Super League plans abandoned by the English clubs – and quite rightly so! 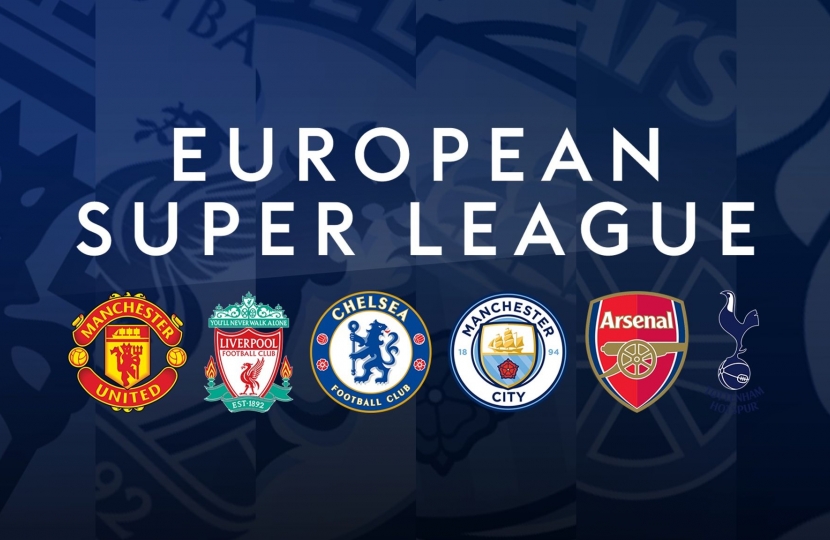 Over the last couple of weeks, quite a few people locally got in touch with me to share their views about proposals for a European Super League and so I wanted to say something about this, despite the fact that events have fortunately moved on, and because I also know the newly announced review of football governance will be of interest to many.

Like so many, I was appalled to learn that a number of clubs from across Europe, including six currently competing in the Premier League, signed up to proposals for a European Super League and I was quick to share those local views with my ministerial colleagues who rapidly took a robust stance on this.  Indeed, following the initial announcement that Manchester United, Liverpool, Manchester City, Chelsea, Arsenal and Tottenham planned to join a European Super League, I was delighted that the Government and the Prime Minister moved so quickly to examine all the possible routes to block the move, including through legislative mechanisms.

Football is undoubtedly at the heart of communities right across the country and the proposals put forward would have created a closed shop of elite clubs at the top of the game – creating a league based on wealth and brand recognition, rather than upon merit. I am delighted that the English clubs involved have now moved to formally withdraw from the competition, following pressure from fans, the Government and the Prime Minister, and other key stakeholders. It is really good news that common sense has prevailed, which I know will be a relief to so many in our area and across the country.

The steps taken by the hierarchy of these clubs does, however, demonstrate that a review into football governance should be an absolute priority. In the 2019 General Election, I stood on a manifesto commitment to establish a fan-led review of football governance, and I welcome that this review has now formally been triggered. As noted by the Culture Secretary, this review will be a root-and-branch examination of football in this country. It will cover the financial sustainability of the men’s and women’s game, financial flows through the pyramid, governance regulation and the merits of an independent regulator. Crucially, in light of the proposals for a European Super League, it will also consider how fans can have an even greater say in the oversight of the game. Further details about the review can be found by searching: https://www.gov.uk/government/publications/fan-led-review-of-football-governance/terms-of-reference-for-the-fan-led-review-of-football-governance.

My latest fortnightly Westminster Report newsletter has just landed in inboxes, filled with lots of interesting news and updates from across Corby & East Northamptonshire and my work in Westminster.